This week is Deaf Awareness Week, and to mark it we’re sharing a blog post about the challenges of having a hearing impairment in both ears.

My name is Sunil Teeluck. I am a senior lawyer within the OPG legal team and I have a hearing impairment in both ears. I’ve been with OPG for over 5 years. I wasn’t born with the hearing impairment, it was a result of suffering from meningitis when I was at university studying law.

So, there I was, a few days after turning 20 and I wake up in hospital not knowing why I was there. The doctor tells me about meningitis and I think “Actually, that’s not too bad”, as I remember hearing horror stories of the side effects of meningitis. So being in hospital seemed okay. But then I start to hear a lot of buzzing, and people’s voices are not clear. At first I think this is due to the medication I was taking, but over the next 2 weeks that I spend in hospital, my hearing gets worse and worse. It’s clear that this is not just the medication and that something is actually wrong.

Whilst in hospital I have my hearing assessed and it’s discovered that I’ve lost 2 thirds of my hearing, and that I have to wear hearing aids in both ears for life. To make it worse, the consultant tells me that my hearing will get worse as I get older. To say this came as a shock is an understatement. I didn’t know anyone with a hearing impairment or any disabilities in general. I was at a loss as to what to do. I kept thinking “I’m in the middle of a law degree, is there any point in continuing with this course as I’ll never be a barrister or solicitor.” I kept thinking that no legal employer would want me. I wasn’t in a great place, but my parents and the university were incredibly supportive, as were my friends and sister.

The university offered me the option of deferring my second year to start fresh the next term, but I thought “I’m here now, let’s get on with it so that it’s done.” My friends were excellent, and I wanted to prove to myself that this wasn’t going to be my story of failure. I wouldn’t let losing my hearing stop me; it didn’t stop others who had had this impairment since birth so why should I be any different? I finished university with a 2.1.

After university, I took a year out to consider my options and spoke with various people as to what I could do. In the end, I was encouraged to do the Bar to become a barrister. I applied, passed and obtained pupillage straight away – I didn’t expect any of that to happen if I’m honest. During pupillage, I found it difficult to hear in court and in large rooms but, where possible, the court staff provided me with hearing equipment. As time progressed, technology improved, so much so that my hearing in large rooms and court rooms is fine. I still find that if there are a lot of people talking at the same time I can lose people’s voices, or if I talk with a person who is softly spoken that it can be hard to hear them. But I’m assured that this happens to people with both ears functioning too. 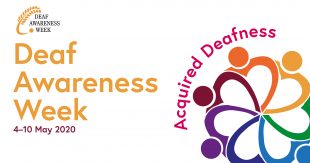 During my 15 years with the Civil Service my hearing has not been an issue at all, and I’ve progressed through various grades. There may be times when I can’t hear people, but I’m now confident enough to let people know – whereas to start with, I wouldn’t ask people to repeat themselves as I felt embarrassed.

When I look back at it, I sometimes think that losing my hearing was both one of the best and worst things to ever happen to me. It has driven me to want to achieve more. It is not, and cannot be, a reason for me not to be able to do what I want, or to live the life I want. When my hearing goes eventually, well, I’ll deal with that then – that’s tomorrow’s problem, today is the present so I’ll enjoy that.