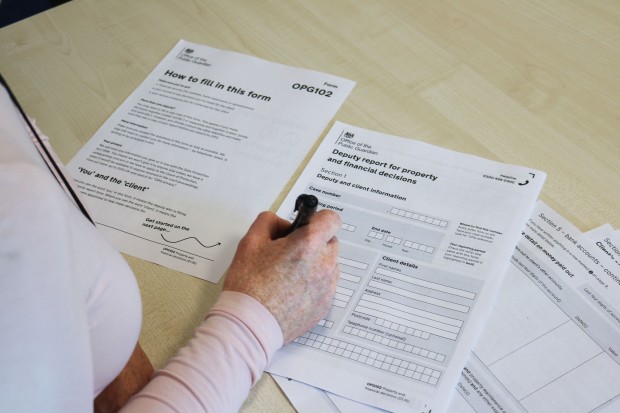 Part of the content team’s role in OPG is to produce task-oriented information such as guides to OPG’s core services. Balancing OPG’s needs with those of the people who use our services is an important part of the work that we do.

Our team was asked to review the new version of the deputy report forms, as they needed a rework after some policy changes.

Normally we’d ask a professional user researcher to interview and study deputies using the form. But, time and budget constraints meant we weren't able to do this. We had to make a choice between no research and doing it ourselves. On the grounds that some research is better than none, we went ahead and did it ourselves

Before getting started, we did some reading and learning. Within our team we had a mix of transferrable experience: interviewing, workshops, card sorting exercises. We were also lucky enough to have an experienced user researcher on loan for two sessions. We took things slowly and carefully.

The majority of people who will use the deputy reporting forms are court-appointed deputies. These are people with responsibility for another person’s finances: a person who has lost mental capacity. In most cases, this is a family member or spouse. These were the people we wanted to help us test the new forms.

We know that a deputy’s first year is often stressful. Someone who has lost capacity may have been losing control of their finances for a while. By the time a deputy steps in, they could be in a real mess. For this reason, we found it hard to recruit deputies in their first year. On the whole the response was, I’d love to, but I’ve got my hands full.

This meant that most of our research participants were more experienced deputies and recruited from the London area, to make it easier to arrange sessions. But, as some research is better than none, we worked with what we had.

This type of user research generally takes place in a 'lab' – a room with a two way mirror, with audio and video recording. Instead, we had a meeting room in one of our offices. In the room was a facilitator, a deputy, a designer and a note taker. Other colleagues silently observed the testing session using Skype. We didn't need much - just time, patience, a black biro and a glass of water.

What we learned part 1 - research findings

Four rounds of user research showed us many ways that we could improve the deputy forms. Some things sound obvious, but it’s good to prove them through testing rather than acting on a hunch, such as:

Based on our findings we completely changed the structure and order of some parts of the deputy forms. This meant it flowed more naturally for our deputies. We also learned that where we place prompts on the page had a big impact on whether the deputy saw them.

What we learned part 2 - user research is hard

One thing we weren’t prepared for was how upsetting some of the sessions would be. Being a deputy can be tough, especially if it is a friend or family member who has lost mental capacity. We wanted to hug some of the participants but of course we couldn't. All we could do was to put them in touch with their case managers and thank them for their time.

One of the biggest challenges was to stay quiet during the sessions.  We had to stay completely neutral. It's hard not to nod and smile encouragingly when someone’s talking to you and asking questions.  We wanted to help, but the best way to do that was by working towards our goal: making the deputy forms easier for everyone to fill in.

The new deputy forms are now ready for deputies to use and we’ll be publishing them on 1 March 2016. We learned a lot from the research process, and we're grateful to everyone who agreed to take part. We hope to carry on learning from deputies about how to make these forms easier to fill in, so please let us know what you think.